How bad is Turnpike traffic compared to last year?

It's been taillights and bumper-to-bumper traffic on the Mass. Pike this fall, as construction on the roadway has slowed commuters and, in some cases, more than doubled the travel time on the roadway.

Driving eastbound into Boston between Newton and Allston-Brighton at morning rush hour, for instance, now means traveling at 20 miles per hour instead of the 50 miles per hour drivers cruised at this time last year. In total, that means a 10-minute slowdown on that stretch of roadway, according to MassDOT's own Real Time Traffic Management system.

In an analysis of 10 workdays in September 2014, the median travel time between Newton Corner and the Beacon Park onramps on Interstate 90, a span of 5.3 miles, was about 15.75 minutes. Last year, it took 6.2 minutes to travel the same distance. With 250 workdays in a year, that adds up to about 65 hours on the road.

And it's not just rush-hour drivers who are affected.

Those on the roads late at night are experiencing slowdowns, too. For nighttime drivers accustomed to open roads, the construction is slowing traffic down at times to near rush-hour crawls.

At the heart of the traffic increase is a $22 million project expected to last two years. During that period, daytime drivers lose a lane in both directions for 1.4 miles while crews replace the Commonwealth Avenue bridge over the turnpike. MassDOT says most of the construction work occurs at night to avoid even more congestion during normal hours.

To measure the slowdown, traffic speeds were recorded on one stretch of eastbound highway between the onramp at Newton Corner and the onramp for Beacon Park. At those locations, detectors collect bluetooth information from cellphones within vehicles and a real-time traffic system uses that data to determine traffic flow based on how long it takes drivers to travel between sensors.

The delay is in the range calculated by officials from the Massachusetts Department of Transportation at the beginning of September.

The work isn't just creating traffic delays on the Mass. Pike, either.

Before construction, drivers had two lanes to merge with the turnpike traffic. Now with only one lane, vehicles sometimes back up to well before the toll booth entrance.

"It's safer and believe it or not, it's an improvement," said Verseckes. "Folks might not think so, but that option's better than making people merge at the end of the ramp and then merge at the right lane of the turnpike."

The statistics for the time spent idling on the onramps near the construction zone is not measured by the current real-time system. But MassDOT has started experimenting with another real-time traffic tracking system targeted to more specific areas around work zones that will not only measure speed, but volume and density of traffic as well. Officials are still tweaking the system, which uses sensors and smartphone data, to improve its accuracy, said Verseckes. MassDOT hopes to make the extra layer of real-time data open to the public like its previous system.

The map and table below show the aggregated median travel time between Newton Corner and the Beacon Park onramps eastbound before the construction zone. The data for September 2014 traffic was gathered every 15 minutes from MassDOT's real-time traffic monitoring system that was launched in May 2013 to show drivers estimates of travel time on highway displays. The Globe matched the current data with 2013 historical data from a MassDOT-sponsored hackathon in December, and found the median of travel time for each time period over 10 workdays. 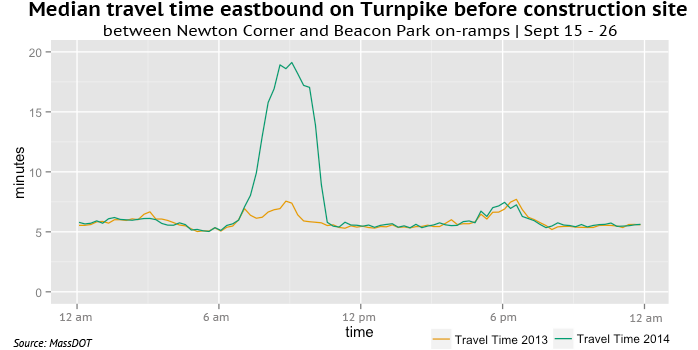 According to the data, Mass. Pike traffic is not as affected in the direction fewer people are traveling — westbound from South Boston in the mornings, for example, or eastbound to Boston in the evenings. This year's westbound afternoon rush hour toward the construction zone and all traffic after eastbound and westbound is consistent with 2013. Rush hour was measured between the hours of 8 and 10 a.m. and 4 and 7 p.m.

Want your commute included in the Boston Globe's look at traffic? Tweet your departure location when you're leaving in the morning to @GlobeDataDesk using the hashtag #amcommutestart and then let us know where you've arrived at by tweeting @GlobeDataDesk using the hashtag #amcommuteend. In the evenings, do the same using #pmcommutestart and #pmcommuteend.