There’s no Korean Disney princess. So a Harvard student created her own.

Julia Riew is on a journey to fill a void in the world of Disney, which features fantasy princesses from all over but not from Korea.

So she has made one.

The 22-year-old Harvard student has spent the past year and a half writing and composing a full-length musical as part of her senior thesis project — complete with script, screenplay, and more than 15 original songs. Her Disney-inspired work tells the story of a Korean princess named Shimcheong, who’s based on a character from a Korean folktale, “The Blind Man’s Daughter.”

She hasn’t even finished her project, but it already is drawing worldwide notice — and serious interest from filmmakers and theater producers.

Over the past few weeks, Riew has been building that audience, teasing snippets of songs from the musical, which have gone viral on TikTok. Fans all over the world have sung duets with the videos, created art, and celebrated the power of representation and inclusion.

“At its core, the story is inspired by the original folktale, but it’s also inspired by my personal journey in searching for belonging as a Korean American,” Riew said Thursday in a phone interview.

In the TikTok videos, Riew, who sings and acts, appears as herself before snapping her fingers and “transforming,” thanks to a filter, into an animated Disney princess.

A song called “Dive” has emerged as the musical’s signature anthem. Playing the character Princess Shimcheong, Riew belts: “Now all the fish in the sea can’t stop me. All of the waves in the world can’t rock me. I’m on a mission and gee, just watch me go!” The videos have racked up hundreds of thousands of views, including on Korean Twitter and Instagram. Riew — and Shimcheong — have gained worldwide attention.

The songs in the video are catchy — like Lin Manuel-Miranda catchy. So much so that in addition to the avalanche of fan support on social media, several A-list Hollywood producers have reached out to Riew to express interest in taking on the project.

“Every time I get a new e-mail or call, I’m at the point where I’m honestly speechless,” Riew said. She is now working with an agent to decide with whom to partner.

But beyond the high-profile recognition, Riew has been most moved by reactions from the Korean community.

“It’s been so exciting to hear from parents and people who are Korean or Korean American who have seen the videos and tell me that their children would love to see [the musical], or that they would have loved to see it as a child,” she said. “That’s what warms my heart the most.”

Riew grew up in St. Louis, and has been in love with music and theater for as long as she can remember. She started playing the violin at 4, composing music at 8, and writing songs at 11.

“I was always that kid on the playground making up plays and directing my friends’ mini-musicals,” Riew said. “Drama class was always my favorite.”

When she first arrived at Harvard, Riew had her sights set on studying theater and music. But not long into her first semester, she ditched that plan for pre-med.

“I wasn’t finding any other Asian students doing theater, and that was something that made me feel quite like an outsider,” Riew said. “So I switched out of it.”

By sophomore year, Riew decided to return to theater and music studies. She also co-founded the Asian Student Arts Project, meant to encourage Asian students to get involved in the arts on campus. Riew even co-wrote a full-length musical about her and her co-writers’ experiences as Asian Americans.

“We sold out all five shows, had a staff of 40, and a cast of 12,” she said. “Every single person was a first-timer, because Asian students weren’t really doing theater on campus before that.”

By her junior year, Riew was doing professional work for the American Repertory Theater.

“Julia is a rising star in American theater and we’ve been lucky recipients of her talent,” said Tony winner Diane Paulus, the artistic director of the A.R.T. “What makes her so unique is her singer-songwriter craft and her passion for the theater. …. Julia was that kind of student who was a sponge and wanted to learn everything she possibly could.” 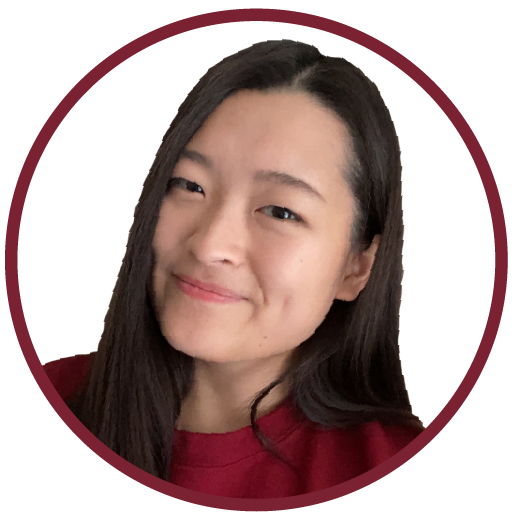 Riew is a third-generation Korean American, and her work in music and theater has turned into a vessel for exploring her identity.

In the summer of 2020, Riew’s grandfather passed away from COVID-19, and her grandmother moved in with her family, who had recently relocated to Connecticut. 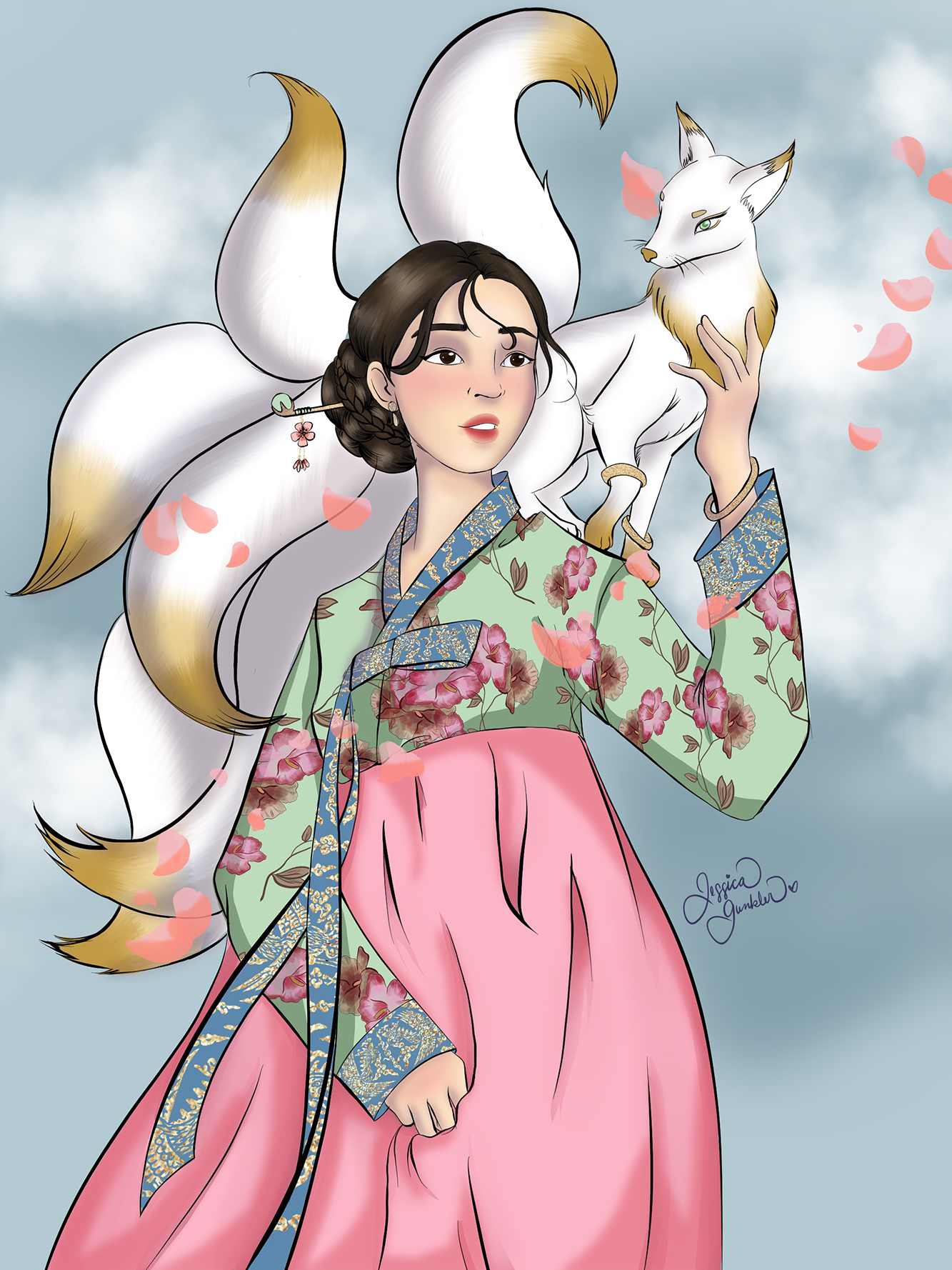 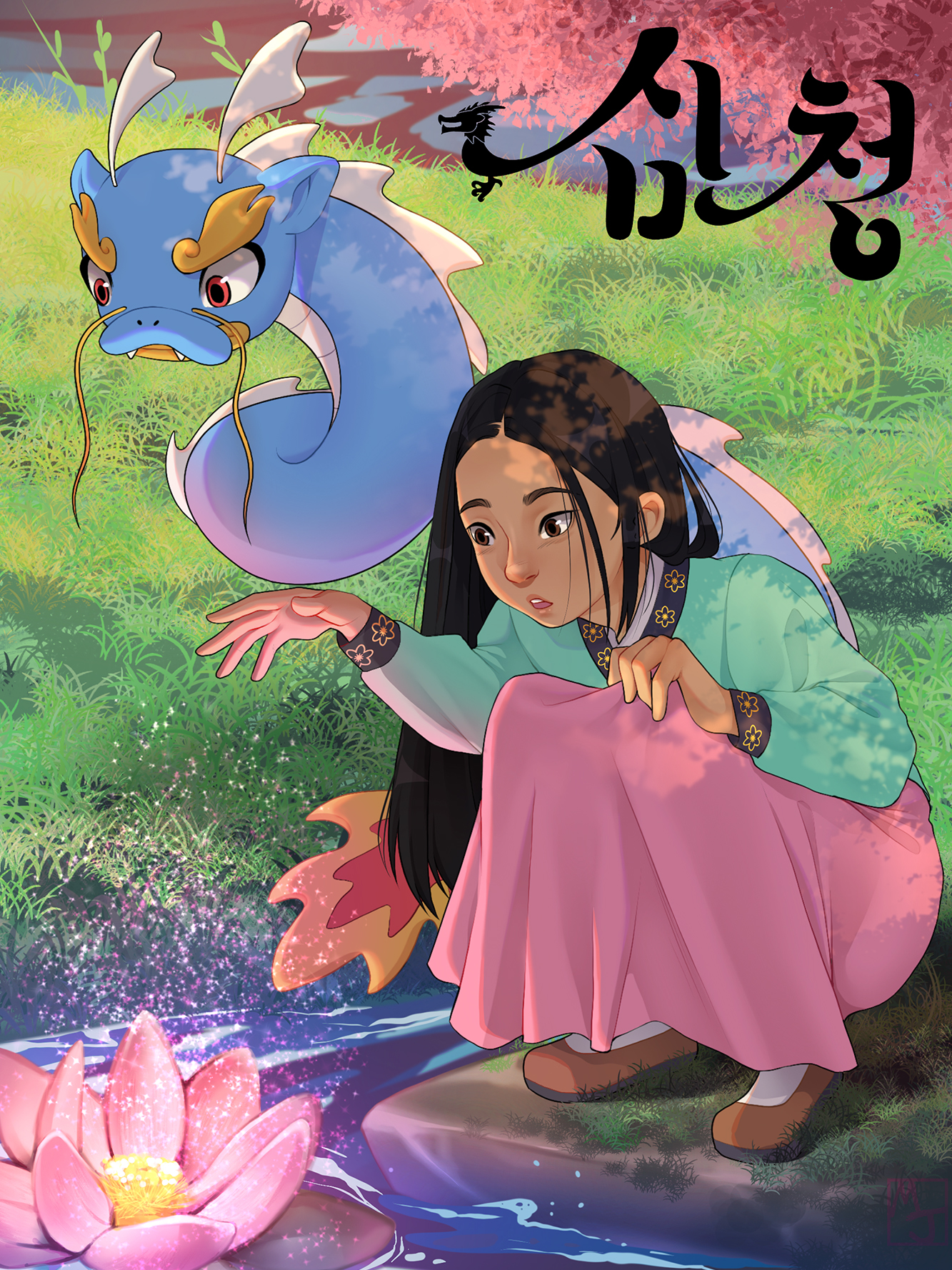 The story is about a young girl, Shimcheong, who goes on an adventure to save her father, who is blind. She ends up getting trapped in a kingdom far from home, and the story follows her as she finds her way back.

“Mine is a bit different from the original,” Riew said. “Many elements of [the musical] are inspired by my own life, but there are also certain things I wanted to update for a 2022 audience.”

Shimcheong’s sense of self is one example.

“In the original folktale, a lot of Shimcheong’s merit comes from the fact that she’s beautiful,” Riew said. “That’s something I wanted to change. I wanted Shimcheong to be courageous. I wanted her to be active and follow her dreams.” 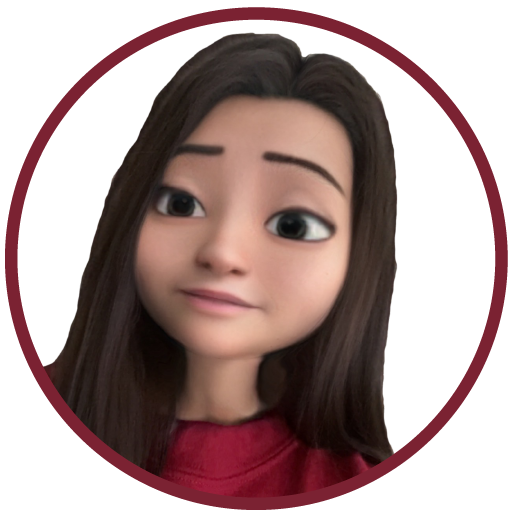 “At its core, the story is inspired by the original folktale, but also by my own personal journey in searching for belonging as a Korean American.”

Riew, who has written several musicals, said this script was particularly hard to write.

“I really struggled through writing this story because at many times I stopped and asked myself, ‘Am I Korean enough to be telling this story?’” she said. “I think this process has caused me to question my identity more than any other process has before.”

After talking to several of her mentors, she realized “that I can only represent my own experience, which is one experience, and that’s OK. There’s not one way to be Korean.”

It has long been her dream to write for Disney or Broadway, and her ultimate goal is to see “Shimcheong: A Folktale” as an animated feature or on the stage. 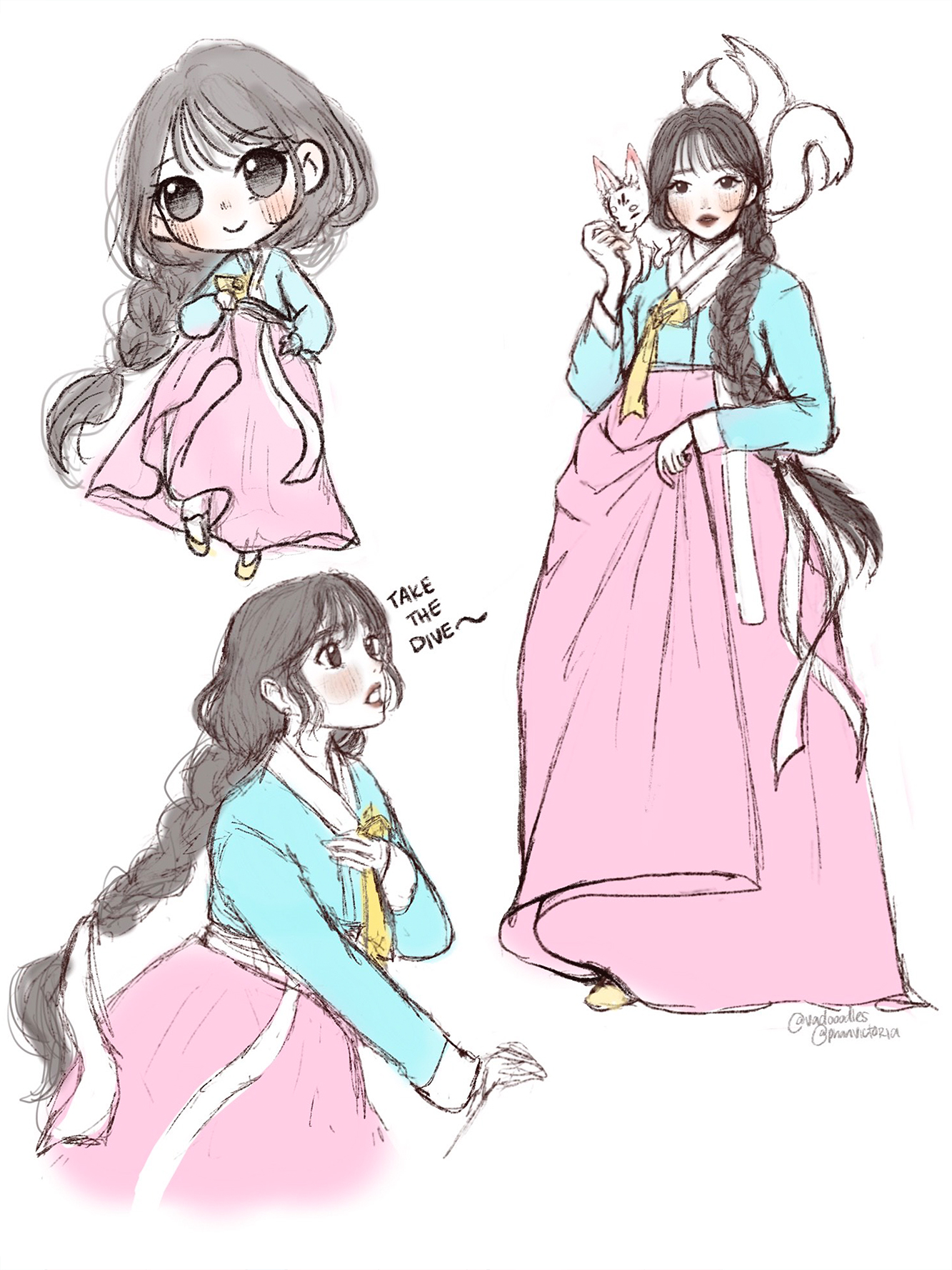 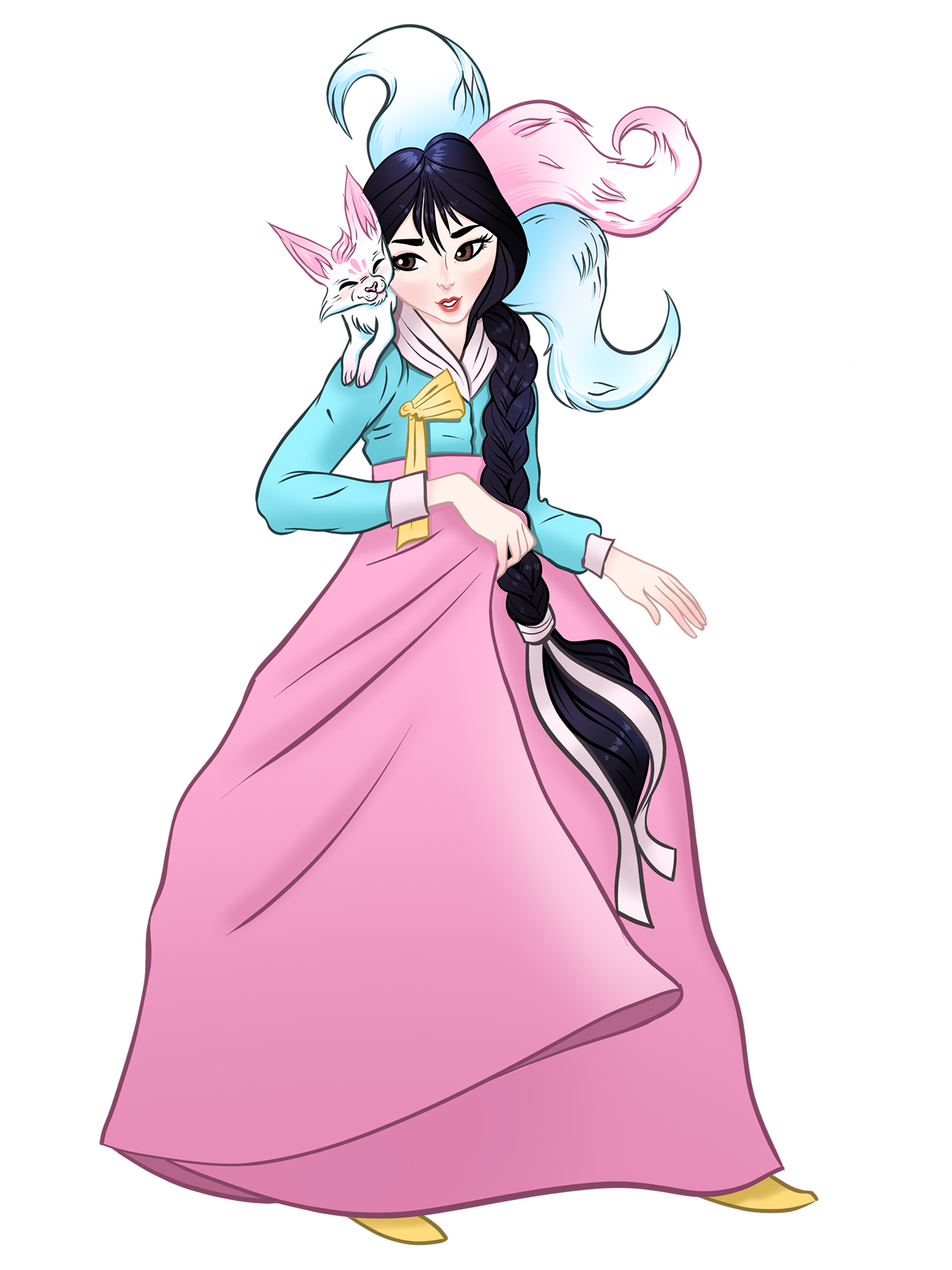 Illustration of the princess in Julia Riew's TikTok musical "Shimcheong: A Folktale". Jose Lopez for the Boston Globe

While the future of the project looks looks bright, Riew still has to present it to her thesis evaluators next month — which Paulus said she’ll be “front and center” for.

“I think [Riew’s] vision for ‘Shimcheong’ is so powerful. If you don’t see [representation] out there, you create it and make it a reality,” Paulus said. “As an Asian American artist myself, I’m super excited about her commitment to representation in the arts.”

“I think for the first time, I’m feeling the strongest sense of belonging that I’ve ever felt before in a community,” Riew said. “I’ve always longed to be closer to my Korean heritage, and I think every single day I’m learning more about what it means to be a Korean person.”