On the Internet, waiters can spill all they want

When diners misbehave, and definitely when they undertip, social media gives restaurant waitstaff a way to serve up disdain.

One of the reasons my tenure at Sonsie never saw me making the leap from busboy to server was that I got caught in the stairwell finishing Dan Aykroyd’s unfinished Caesar. (First: I was really hungry; second, he hadn’t touched it and was kind of rude to everyone; third, it was and is a very delicious salad.)

But the other, bigger reason was I didn’t want to wait tables, thanks to the nightly cycle of horror stories I’d heard from the servers over post-shift drinks at the Eliot Lounge (“the unofficial finish line” of the Boston Marathon doubled as the official finish line for dozens of Back Bay bistro servers). Under low light and well past last call, they’d spin tales of their tables the way a crew of grizzled, grossly undertipped fishermen might recount their encounter with an intensely irritating family of whales:

“He was snapping to get my attention, but he wasn’t a good snapper, so I made like I couldn’t hear him.”

“At one point, they were both asleep.”

“He asked me for a hooker.”

Watching my barely superiors gather in the dead of night to serve one another this decidedly off-menu dish of piping hot contempt was like witnessing the sacred rituals of a secret society. And when the Eliot closed its doors in 1996, and as I moved on from busing at Sonsie to a series of impossibly worse food-service jobs (one time, at Oskar’s on South Street, a customer nonchalantly pressed her gum into my palm), I wondered where they’d go to complain and make space for peace in their dreams.

Much has changed since then, but the fraught relationship between diners and their servers (and the servers who aren’t actually your servers but whom you insist on bugging for more bread anyway — seriously, have you no self-control?) is most certainly not one of them. For evidence, you need no reservations and need go no further than the virtual Eliot of the Internet.

There’s a rich tradition of customer shaming online. Formative food-service kvetching blogs like The Stained Apron and WaiterRant have been feeding the Internet’s appetite for restaurant war stories since 1997 and 2004, respectively. The former, due to resume this fall, tops its menu with a well-intended section on “What All Customers Should Know.” (“Refusal to sit at the table the host suggests and insisting on one in a busier section, could mean slower service.” Hm!)

Having tried its best to save you from yourselves, the blog then digs into a multi-course menu of roasted diners: There’s a wall of shame targeting “menu manglings” (Sample: “One poor soul, trying to order wine, actually ordered a ‘CAR-AH-FAY of SHAB-LISS’ ”). There’s a tellingly titled collection of stories called “Keep Your Brats At Home!” There’s a compilation of “Feedback from Idiots” on a page titled “Morons” (“this site has made me learn a very important lesson: waiters as a group are very vicious people”). There’s a whole page of quitting stories (and fantasies), and a page simply titled “Sweet Revenge,” the contents of which may have inspired me to eighty-six restaurants (as well as cheesecake) for good.

Then there’s Sundays Are the Worst, a now dormant site created by Chad Roberts, a Tennessee pastor who was shaken by a viral image of a note left by a church group for its server (“I give God 10% Why do you get 18”). “It bothers us, angers us and saddens us when we read these stories of how some Christians have judged, belittled and mistreated the serving community,” he writes on the site’s About page. And after scrolling through 25 pages of grueling Sunday-brunch trauma tales rendered in unforgiving detail, you might be inspired to bring your server some brioche and a mimosa instead of the other way around.

The current post-blog phase of social media has given customers yet another opportunity to always be right by empowering any “two-top” (table for two) with a pair of thumbs to self-identify as a restaurant critic and Yelp like everyone’s watching. But it’s also provided a therapeutic haven for food-service workers to collectively vent about your (yes, your) routinely awful behavior while under their fleeting watch.

There’s Bitter Waitress on Facebook and Bitter Waiter on Twitter — accounts devoted to serving up deliciously catty unspoken mouthfuls — e.g., “An entree costs $35. We probably don’t have your redbull”; “Oh, your show starts in 20 minutes? Thanks for the timely heads-up”; “Awwwww .  .  . . you want more bread. I want healthcare.”

Meanwhile, The Bitchy Waiter is a virtual Facebook table with nearly 600,000 followers, led by the namesake server and author Darron Cardosa. It hosts a private group of nearly 4,000 servers seeking a safe space to spill the beans on what’s eating them.

One recent post refers to diners who stay past closing as “campers.” There’s a primal all-caps howl over tables that deduct their gift card(s) and tip on the remainder (the name for those is “monsters”). Another post tells the tale of a woman who sent her club sandwich back to the kitchen because the toast failed to retain its heat. There’s a gripping absurdist one-act centered around a customer demanding Grey Goose and vodka. And after 20 years in the business, one waitress says her only remaining response to customer complaints is “laughing hysterically to the point that my eyes are watering and I can’t stop.”

There’s even a post proposing the creation of a smaller, more private place to complain (something away from the bathrooms if possible), since restaurant narcs were allegedly infiltrating and ratting out servers to their employers. (Be aware that the drama you bring to the table is nothing compared with what every restaurant on earth has cooking behind the scenes. You are a subplot, tops.)

The group also hosts thousands of memes — perhaps the most potent way that agents from the inside have landed so many flies in so many soups. Memes, well executed and widely distributed, can serve as the language of anonymous consensus — ideally suited to flipping mass violations of etiquette. What your server may not be allowed to say to you, Morpheus from The Matrix sure as hell can: “What if I told you ‘Diet Coke’ is not a response to ‘How are you?’ ” 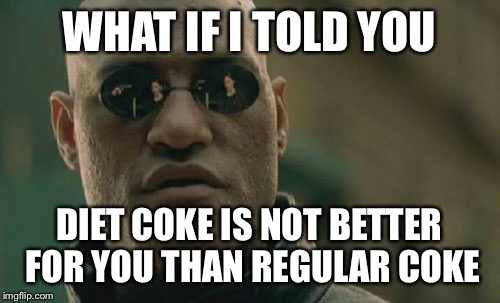 Nobody’s perfect, old habits die hard, and other cliches, so, yes, none of us may ever be the customer of every server’s dreams — it happens, all kinds of circumstances bring us to each other’s table, sometimes we’re hangry.

But if decades worth of material online documenting the ways to be a better diner don’t make a dent, perhaps just one more scrap I picked up from the bar at the Eliot will: Giving 20 percent 100 percent of the time is the best way to ensure your server isn’t doing the same.