For victims of domestic violence, each day carries danger

Whatever is at hand becomes a weapon, one more way to hurt, to terrify. That much is plain in 4 years of police reports — reports now screened from view. The rationale is privacy, but a window into horror is lost.

The ways to hurt are infinite.

When you live with an abuser, everything is a weapon. In their hands, innocent objects like ice-cube trays and checkerboards and apples and pillows become ways to inflict suffering, to demand submission.

“I got hit with a branch when I was pregnant,” said Tuti, sitting with three other survivors at a shelter in Dorchester on a sweltering Tuesday afternoon. They counted the ways their former boyfriends failed to love them. “He punched me in the head,” Tuti continued. “He spit on me. He kept hitting me with a bottle of water.”

“He picked up a video game, anything near me,” said Trinity. “He hit me in the head with a bag of Pampers.”

It is all there in the police reports, set out in mundane, relentless detail. Globe data visualization reporter Gabriel Florit analyzed more than four years of reports on domestic violence between intimate partners in Boston, up to April 2014. That is when the police department changed the way it reports these incidents, providing less detail on this world of cruelty and terror.

Soon, the police reports will be made less accessible statewide, under new domestic violence prevention legislation that shields them from public view unless a case goes to court. It is a step designed to protect victims who may be afraid to come forward if their identities become public. But that potential good comes at too high a price: The new law also shields abusers from scrutiny, and closes a window on a world that must remain vivid, unforgettable.

The reports are a critical record of the evil enacted in homes across the city. Laid end to end, they reveal the massive scale of the problem. And not just its vastness, but its pervasiveness. The potential for violence saturates every minute of a victim’s day. Look at the list of weapons, the cat and the lamp alongside the machete and the crowbar. (Witness, too, last week’s horrific case in Middleborough, where a mixed martial arts fighter allegedly encouraged a bull terrier to attack his beaten wife). You can imagine the moments that exploded, at breakfasts and dinners, in kitchens and living rooms. You can see inside the homes where abusers lurk every day, reaching for whatever object is nearby to impose their will.

We know all too well where many of those everydays end — Jared Remy’s gruesome murder of Jennifer Martel, for example. Most of us don’t see the moments that can lead to those ends. We get to know the victims who die, but not those who call police, worried they might be next. There are so many more of them. They are dots on a map.

And beyond those dots lie countless others to whose homes police never come, because the people who would have made the calls were too embarrassed or afraid. Or because they got so used to torment they couldn’t see it for what it was. Or because their abusers promised to make things better, giving a glimpse of what made them attractive in the first place.

“I would just let him keep hitting me and abusing me,” said Tuti. “And after, he would make me feel special again. They can be so sweet, then they just turn crazy.”

The women around the table nodded. Having recently fled their partners, they live with their young children at the shelter, run by domestic violence prevention outfit Casa Myrna. They did not want their full names used for fear their attackers might find them. A couple of them have so little perspective on their abuse that they still blame themselves. All of them are certain that luck and timing alone separate their fates from Martel’s.

“What’s going through her mind when she’s being stabbed?” Trinity asked. “ ‘Damn, I should have left.’ ”

Each dot represents a BPD report of domestic violence between intimate partners from July 2011 to Aug. 7, 2014. 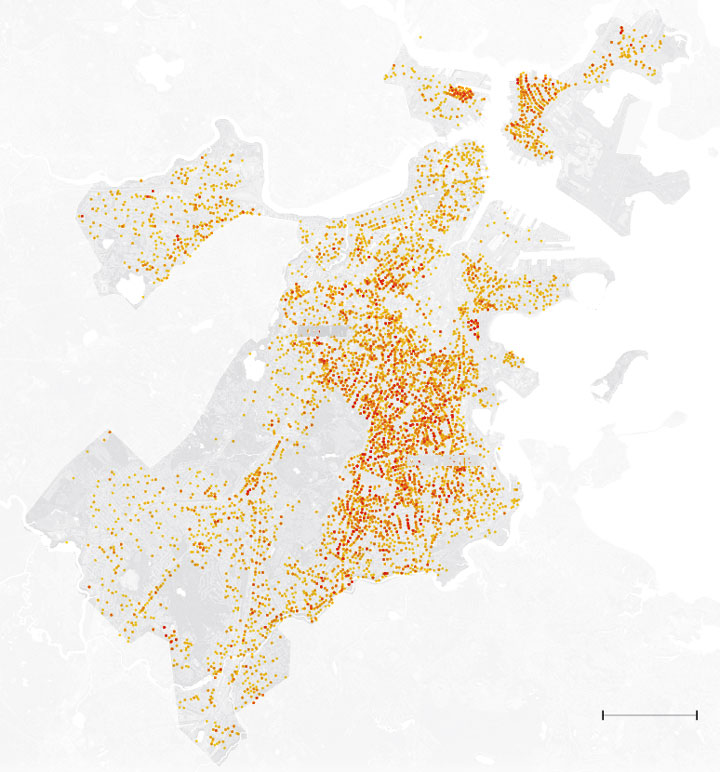 Each of the four women knows others who are still stuck in the lives they escaped. These victims are also bystanders, facing the same fears and questions their own loved ones and neighbors did when they were being abused. Should they call the police? Would that put them in danger too?

One time, Tuti was in a car with a friend whose boyfriend hit her “like, boom, and her head cracked the glass.” Tuti kept quiet, worried the boyfriend or his friends would come after her if she reported him. She wasn’t sure if that was the right thing to do.

“If you have a friend and it’s happening, how would you come about it?” she asked the others. “I wouldn’t want something to happen to me and my daughter.”

Miladas, a small-framed 20-year-old whose abuse has left her angry and untrusting, told Tuti she was right to keep quiet. It was up to her friend to extricate herself.

“Just don’t get in it,” Miladas said. “If she’s not doing something about it, she doesn’t want to.”

Tuti agreed. And besides, she said, she didn’t want to be known as a snitch.

The funny, fast-talking 19-year-old was with her abusive boyfriend for 2½ years. He isolated her from her family. Sometimes he would lock her in a room, or take all of her shoes to make it that much harder to leave.

The days had a grim rhythm to them, a rhythm matched by the Boston incident reports, which show calls to police rising steadily through the day and peaking at night, after dinner and drinks, after kids are put to bed, after partners return from nights out, and when more neighbors are around to hear screams and call police.

“Nighttime was the worst,” Tuti said. “At night, the fights would get real strong.” 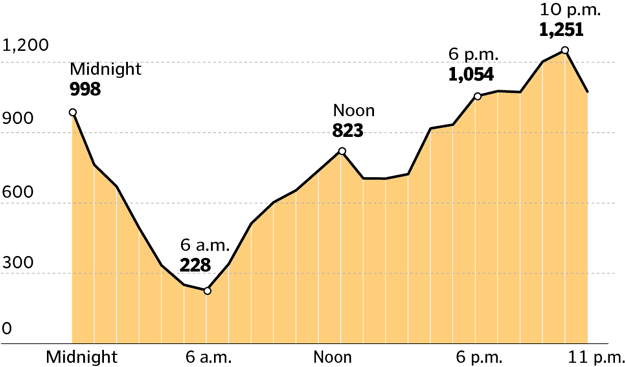 During the day, Trinity, 21, was in classes, and safe. The outgoing, red-haired student at an alternative high school hopes to be an accountant.

The end came after a Black Friday shopping trip in 2012. The couple bought a video game, diapers, some toys for her son. That night, they argued because Trinity had seen her boyfriend give his number to another woman at the mall. Their bargains became weapons. He hit her in the head with the video game, pummeled her with the packet of Pampers.

The fight spilled out onto the landing outside their door.

“The way he looked at me, his eyes were red,” she said. “I felt myself being lifted up from the ground. He held me over the second-floor banister, and he was choking me. ‘I’m gonna kill you, I’m gonna kill you.’ ”

Here it was. The daily ritual of abuse turned deadly.

“I was thinking about my dad and my son and the baby I lost,” Trinity said. “All I heard was my son crying.”

Then, for whatever reason, he relented. When police came, she initially declined to press charges. But she left him, and did it the next day.

“I walked out of court with my restraining order and my head held high,” she said. “I’m living my life.” She seems determined to stay out of the world captured in those police reports, now fading from view. She wants her son to grow up to be respectful to women, not yield to the abusiveness that flows through his extended family.

Trinity is spending time these days with someone who seems kind, though she concedes it’s hard to judge. Her abuser seemed nice when she first met him. too, “going to school with his little book bag.” She wonders why she didn’t leave him sooner, why she stayed with someone who could have killed her, instead of finding someone else.

“There’s more sharks in the sea,” she said, speaking more truth than she knew.

• For Jared Remy, leniency was the rule until one lethal night

Yvonne Abraham is a Globe columnist. She can be reached at abraham@globe.com. Follow her on Twitter @GlobeAbraham.