How to fix inequality

American society has been so unequal for so long that it is easy to assume that this level of inequality is natural and inevitable. In truth, however, inequality is a choice that we make as a nation with the rules we create to structure our economy. Thirty-five years ago, we began to write these rules. Lowering taxes at the top and stripping away regulations would, it was argued, incentivize and free up the economy. Sure, there might be more inequality; but everyone would be better off as a consequence of the resulting faster growth. Unfortunately, the “reforms” led to slower growth and so much more inequality that the bottom 90 percent of the population has virtually seen incomes stagnate. Instead of more growth, we got more volatility. Today, people struggle to earn enough to sustain the middle-class life that once was taken for granted. It’s time to rewrite the rules once again to promote growth that benefits all Americans.

In the current political context, discussions about economic inequality and the government's role in leveling the playing field often revolve around taxation and redistribution. But focusing on top marginal tax rates and social safety-net programs can obscure a deeper problem: America's market income — income before taxes and government payments — is among the most unequal in the world, especially for people younger than 60. Viewed from this perspective, increasing redistribution is like stanching the blood from an open wound: It addresses the immediate symptoms, but not the underlying problem.

We can trace the effects of the new rules: Corporations increasingly focused on short-term quarterly returns, and this meant less long-term investment in people, technology, and plant and equipment. Traditionally, productivity and workers compensation moved in tandem. Under the new rules, productivity continued to increase, albeit at a slightly slower pace, but compensation stagnated. Incomes of CEOs and those in the financial sector soared — incentive pay was supposed to lead to faster economic growth, but the only incentives in evidence were to encourage creative accounting and increase compensation at the top at the expense of everyone else. Relaxing financial regulations led to the runaway growth of the financial sector — whose share in GDP increased from 2.8 percent in the 1950s to 7.3 percent in 2014 — with nothing to show for it other than more predatory lending, more instability, more money at the top, and more poverty at the bottom. Weak antitrust enforcement, which was not up to the increasing forces of market concentration, and stronger intellectual property protections led to firms in many sectors to charge excessive prices — well above marginal costs — lowering further the real income of workers. Antiworker laws, lax enforcement of existing worker protections, and failure to update our laws to reflect the changing nature of work has resulted in declining worker power and widespread wage stagnation. Structural discrimination against women and people of color, which has plagued the United States since its founding, has exacerbated the impact of these trends in already disadvantaged communities. 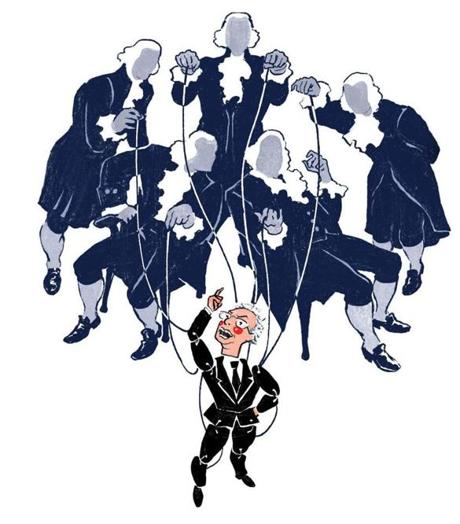 A careful reading of the Federalist Papers shows how the Founding Fathers intended for the system to protect the elite.

The results are striking: Despite decades of growth, the percentage of workers earning poverty-level wages has remained essentially unchanged since the early 1970s, the income share of middle households has declined by more than 10 percent since 1979, and the income of a typical full-time male worker is lower today than it was four decades ago. For those with only a high school education, matters are far worse. Not surprisingly, with growing tension between the reality of life and expectations that each generation will do better than the last, stress increases — to the point that life expectancy, even among whites who are just high school graduates, is on the decline.

All of these changes and more help to explain why America's inequality problem begins long before we turn to the Internal Revenue Code. But this understanding also makes clear that we have the power to change course. Beyond changing taxes and government benefits, we can reduce inequality by rewriting the rules once again. A comprehensive rewriting will help to level the playing field, grow the middle class, and give all Americans an opportunity to succeed. Moreover, we can do this secure in the knowledge that we can have both more economic equality and more growth.

This view of the economy undermines the notion that those at the top are merely receiving their "just deserts" for their contributions to the economy. Some wealthy Americans have, in fact, contributed greatly to the strength of our economy and the well-being of our society. But many have simply gamed the rules — their gains have been largely at the expense of others. Still others have made important innovations, but then amplified their returns through the exercise of monopoly power. Discouraging quarterly capitalism, diluting monopoly power, and preventing the exploitation of workers would strengthen the economy. But rewriting the rules would better align private rewards with social value, thus improving economic efficiency. In other words, the argument for rewriting the rules is not just about fairness: It's about promoting stronger and shared economic growth.

Joseph E. Stiglitz is a Nobel laureate in economics, university professor at Columbia University, and chief economist of the Roosevelt Institute. He is the best-selling author of "Rewriting the Rules of the American Economy'' and "The Great Divide."